Building and Running with the Accelerator Physics Code Libraries at CLASSE

The Accelerator Physics code that is used to build AP libraries and executables is kept under version control in a source code repository. There are selected individuals and groups of developers that are responsible for the primary development and maintenance of their respective libraries and/or applications. The developers that are directly responsible for AP library development will be called primary developers. Specific affiliations will be detailed here in the future. Each morning at around 3:45, an automated build system checks out the latest versions of the code files for all the libraries and applications that comprise an 'accelerator libraries build' and compiles them all to produce various binary entities native to the supported selection of computing platforms on-site. Those libraries and apps are thus meant to be linked against and/or used "out-of-the-box", i.e. without having to deal with source code or compilation. Periodically, when a reasonable number of changes have been comitted to the repository in the course of normal development and maintenance work on the part of the developers, a particular nightly build will be promoted to a DEVELopment build. This process varies in frequency from once a month or so, up to several times a week depending on how heavy development activity is. Once a DEVEL release has proven its stability it may be promoted to CURRENT. The CURRENT release is considered stable and is what all critical secondary developent uses for building applications. The tradeoff is that CURRENT will perhaps lag behind subsequent DEVEL releases in terms of features and polish, but should be nominally bug-free. These promotions to DEVEL and CURRENT are called rotations and upon each rotation a notification is sent out to the acc-code-lepp lab-managed Hypernews mailing list. Additionally, to facilitate the recreation of a given release if necessary and to aid primary developers in indexing snapshots of their code over time, upon each rotation the collection of files used to build a given release will receive a tag in the repository. This simply means that a meaningful bit of text can be used to obtain the snapshot of files used to produce a release from that point on instead of a cryptic version number or numbers. This feature is useful mainly for primary developers. These pre-compiled releases are archived for a period of time, typically more than six months, and the libraries, objects, and modules contained within can be linked against by programmers wanting to incorporate the functionality they provide into their own work. These developers will be called secondary developers. A subclass of secondary developers might include individuals that do not work under the direct purview of the lab and will be called off-site developers. Convenient support for those wishing to obtain code from off-site is still pending.

For any development work, primary and secondary, that requires linkages to precompiled binaries a mechanism exists allowing you to select a specific version of the AP libraries to link against, in addition to specifying a compiler compatible with the version you choose, so that your code will properly link against the libraries. Please consult the information in DevelopmentEnvironmentSetup to see how you may use this mechanism to select various versions

The languages supported for automatic dependency generation by the ACC Build System during library and application development:

The ACC build system attempts to automate a number of key functions for the user: These capabilities are provided by a set of tools based on GNU Make makefiles and PERL scripts.

The ACC build tools implement a precedence order when searching for header files and F90/F95 module files during compilation, and for libraries during the linking phase. The diagram below provides a quick overview of this hierarchy. In short, the highest precedence is given to versions in the local user area, then to an optional group area which may be maintained by multiple developers working on a single project, then to the officially maintained ACC and 3rd-party Packages areas, and finally to the compiler and system areas. Specific details of the search path structure are described below. 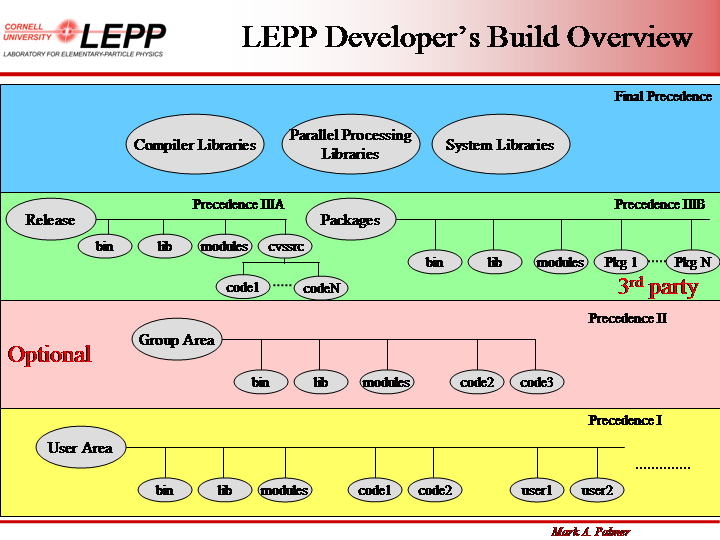 Set Up a Build Area

The ACC build tools provide support for users to build their local codes and an executable from a job directory. Relative to the job directory, binary outputs will be placed in a set of directories at the same level (executables in ../bin, F90/F95 modules in ../modules, and library output in ../lib). Thus you may want to create a code development area in which you place the job directory. Thus your area might look like: In order to set up your job directory, you need to do the following:

In order to build an executable from the code in your job area, you simply need to type the command gmake to run GNU Make. The CESR job makefile will automatically search for all local fortran, C and C++ routines, build them, and link an executable which it will, by default, place in a bin directory which is at the same level as the job directory. By default, linking takes place with the fortran compiler. If you have a C or C++ main and need to link with the C/C++ compiler, some further customization is required (please send email to the CESR Librarian to obtain help).

The search hierarchy for include files that are included by means of the C preprocessor #include are as follows (please note the special search rules described in the following section):

The search hierarchy for F90/F95 modules is as follows:

There are a number of variables that can be set in the job makefile for easy customization. For variables that contain lists, the lists should be delimited by simple spaces.

To allow access to routines found in libraries upon which one's custom program depends, one must: For example, to build software that depends on log_message (found in libc_utils)

Adding Your Own Local Libraries

Any ACC library source directory can be placed in your development area (parallel to your job directory) and built locally. Since this is in the local user's area, this copy will take precedence over any copy in the official release.

Job makefiles can be copied into a user's directory in order to link an executable and to build any local routines provided by the user. An example job makefile, M.job, is maintained in the ${ACC_GMAKE} area. Please contact the CESR_Code_Librarian with questions or problems about this page.